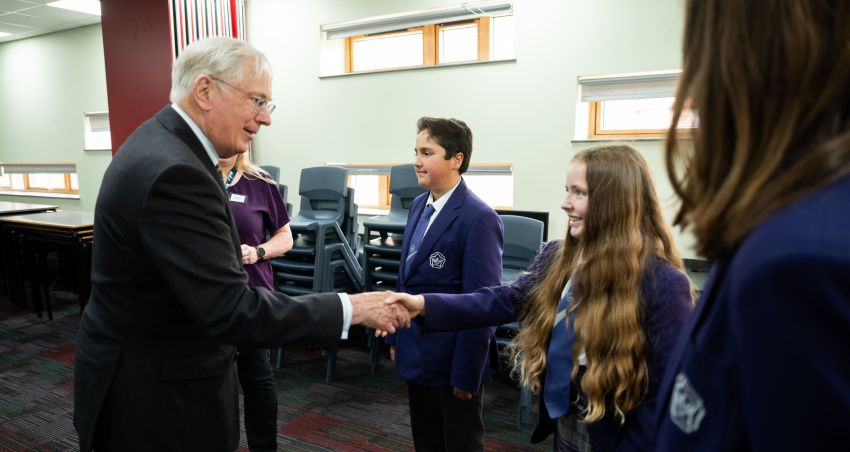 The 50th anniversary of Prince William School was marked with an official visit from HRH The Duke of Gloucester last week (Thursday 30 June). The Duke of Gloucester is the brother of the late Prince William, after whom the school is named, so has a special connection with the school. During his visit he was shown around the school by headteacher, Mrs Elizabeth Dormor, and met various groups of students: members of the student council, members of the student leadership team, school representatives for the East Midlands Academy Trust Pupil Parliament and a group of students who have been working together on a Greenpower car project, who demonstrated the car in action.

The Duke of Gloucester was also introduced to members of local charitable organisations which benefit the school significantly including representatives from Souster Youth which provides free counselling services for students, members of the James Rutterford Trust, a charity which raises significant funding each year to provide opportunities for students from families suffering financial hardship, and members of the Parent and Friends Association, which also raises significant funds for the school each year. With his background in architecture, HRH The Duke of Gloucester was particularly interested to meet school governors and some of the professionals who are responsible for the design and building of the new sports hall whilst being able to look at the architectural drawings for the new sports hall development.

He finished his visit by watching a short excerpt from a recent performance of a student production of Blood Brothers in the newly refurbished main hall and then unveiling a plaque to mark his visit and officially name the hall as ‘The Gloucester Hall’. Mrs Dormor said: “We are very proud to be celebrating our 50th anniversary and to have had this opportunity to show HRH The Duke of Gloucester around the school so he could see the changes that have happened since his last visit. “Students and staff enjoyed meeting with The Duke and demonstrating the vibrant and thriving school community we have here at Prince William School. We were honoured to have The Duke officially name our refurbished school hall ‘The Gloucester Hall’.”